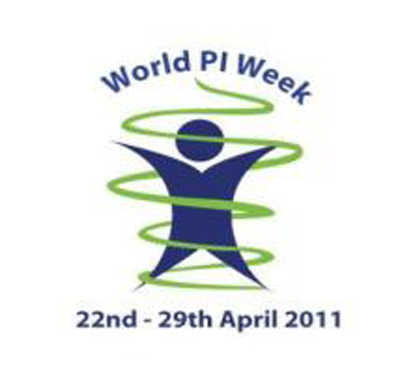 Today, leading immune deficiency societies from every region of the world joined forces with patients, nurses and allied health professionals to launch the first World PI Week. This inaugural week will be celebrated from 22-29 April culminating in the World Day of Immunology on 29 April.

In support of the week, a dedicated Website has been created (www.worldpiweek.org) to serve as a catalyst and tool to support local stakeholders advocacy efforts throughout the week to raise awareness about primary immunodeficiences, drive the earliest possible diagnosis and ensure optimal treatment of this devastating group of diseases is available to every affected patient.

Primary Immunodeficiencies (PI) are hereditary and genetic defects in the immune system that cause increased susceptibility to a wide range of infections, affecting the skin, the ears, the lungs, the intestines and other parts of the body. These infections are often chronic, persistent, recurring, debilitating, and in some cases, fatal.

It is estimated that 10 million people suffer worldwide1. However, in Europe, Primary Immunodeficiencies are classified as rare diseases. Current diagnosis levels suggest that 1 in 8-10,000 people have a genetic primary immunodeficiency that significantly affects their health. However, experts estimate that between 70–90% of PI remain undiagnosed, and the true incidence of some PI within the general population could be as high as 1:250-500 [Prof. L. Notorangelo and Prof. L. Hammarstrom, STOA, European Parliament, March 2004]. These figures speaks for themselves and yet a simple and relatively inexpensive blood test CBC (Complete Blood Count) can identify over 95% of the patients! The problem remains one of lack of awareness leading to the majority of patients being diagnosed too late, with healthcare practitioners writing off these recurrent infections as ‘ just another cold’.

A recent peer-reviewed study documenting the financial impact associated with early diagnosis and management of PI in the USA found that each undiagnosed patient with an underlying PI costs the healthcare system an average of $102,552 (€75,587.40) annually, while after diagnosis and treatment costs to the healthcare system averaged $22,610 annually; yielding an average savings of $79,942 (€58,9223) per patient per annum2.

The World PI Week Partners thank Baxter and CSL Behring for supporting this first World PI Week and hope to gain support from other companies to enable the initiative to continue and become self-sustaining.

What is a Primary Immunodeficiency Disease?

Nearly everyone has suffered from colds, the flu, or sinus and ear infections. Just as many have been affected by cuts, scrapes and abrasions that become infected. Even in the case of more severe infections - such as pneumonia - we expect the cough and congestion to 'run its course', aided by prescription antibiotics, over-the-counter symptom remedies, and our body's own immune system.

Recovery times vary, but the human body can usually rid itself of the infection-causing germs, and work to defend against future "bugs" and viruses. There are, however, instances in which the body cannot recover, and some of these apply to individuals with a primary immunodeficiency disease.

Primary immunodeficiency diseases occur in persons born with an immune system that is either absent or hampered in its ability to function. While not contagious, these diseases are caused by hereditary or genetic defects and can affect anyone, regardless of age or sex. The World Health Organization recognizes more than 150 primary immunodeficiency diseases - some are relatively common, others are quite rare. Some affect a single cell within the immune system; others may affect one or more components of the system.

The infections may be in the skin, the sinuses, the throat, the ears, the lungs, the brain or spinal cord, or in the urinary or intestinal tracts, and the increased vulnerability to infection may include repeated infections, infections that won't clear up or unusually severe infections. People with primary immunodeficiency diseases live their entire lives more susceptible to infections--enduring recurrent health problems and often developing serious and debilitating illnesses. Fortunately, with proper medical care, many patients live full and independent lives.

Is it just an infection?

Do the same symptoms keep coming back or never seem to completely clear? Is the infection severe enough to require hospitalization or intravenous antibiotics? Is there a family history of early infant death or of susceptibility to infection?

If you answered yes to any of these questions it is critical to get an early diagnosis and proper medical care - don't hesitate to ask your physician to check for the possibility of a primary immunodeficiency disease.

Many people with primary immunodeficiency are born missing some of the body's immune defenses, which leaves them more susceptible to germs that can cause infections.

In some cases, untreated primary immunodeficiency can lead to long-term health problems, including permanent damage to organs such as the ears or lungs, or physical disability.

One of the most common signs of primary immunodeficiency is an increased susceptibility to infections. You may have infections that are more frequent, longer lasting or harder to treat than are the infections of someone with a normal immune system. You may also get infections that a person with a healthy immune system wouldn't get (called opportunistic infections). However, signs and symptoms differ depending on the particular type of disorder you have, and signs and symptoms also vary from person to person.

Signs and symptoms of primary immunodeficiency can include:

When to see a doctor

If you or your child has frequent, recurrent or severe infections, or infections that don't respond to treatment, talk to your doctor. While primary immune deficiencies are rare, early diagnosis and treatment can prevent infections that can cause long-term problems.

Complications caused by a primary immunodeficiency disorder vary, depending on what particular disorder you have. They can include:

5. Preparing for your appointment

You're likely to start by first seeing your family doctor or a general practitioner. However, you may then be referred to a doctor who specializes in disorders of the immune system (immunologist).

What you can do

Preparing a list of questions ahead of time can help you make the most of the time with your or your child's doctor. For primary immunodeficiency, some basic questions to ask include:

In addition to the questions that you've prepared to ask your doctor, don't hesitate to ask questions during your appointment at any time that you don't understand something.

What to expect from your doctor

Your or your child's doctor is likely to ask you a number of questions. Being ready to answer them may reserve time to go over any points you want to spend more time on. Your doctor may ask:

There are several tests used to diagnose an immune disorder. They include:

Samples of the amniotic fluid, blood or cells from the tissue that will become the placenta (chorion) are tested for abnormalities. In some cases, DNA testing is done to test for a genetic defect. Test results make it possible to prepare for treatment soon after birth, if necessary.

Treatment to boost the immune system

Because treatment options have improved, most people with primary immunodeficiency can go to school and work like everyone else. Still, you may feel as if no one understands what it's like to live with this chronic illness and the threat of serious infections. Talking to someone else who faces the same daily challenges may be helpful.

The Immune Deficiency Foundation (IDF) has a peer support program, as well as information on day-to-day living with primary immunodeficiency. For example, the IDF has a guide that you can download for school personnel so that they can better understand your child's condition.

Because primary immune disorders are caused by genetic defects, there's no way to prevent them. But when you or your child have a weakened immune system, you can take steps to prevent infections: